At this time of year moist, rich woods are brilliantly lit up with the white flowers of a scraggly shrub called Hobblebush, whose name is derived from the tendency of its sprawling branches to trip people walking through the woods.

Hobblebush’s inflorescences consist of clusters of blossoms that together can measure six to eight inches across. The smaller flowers in the center (still buds in this photo) are fertile, possessing both stamens and pistils, while the larger flowers in the outermost ring are sterile. The inner fertile flowers produce fruit if pollinated and fertilized. The larger outer flowers, being sterile, do not produce fruit — their sole function is to attract insects to pollinate the central mass of fertile flowers.

Blue Cohosh, one of our early spring wildflowers, has diminutive flowers that open before its leaves fully expand. Like Wild Ginger, Blue Cohosh flowers are the color of rotting meat, which may account for the fact that flies are its main insect visitors. Flies tend to feed at a single flower until satiated, which is not conducive to cross-pollination, and thus most fertilization in Blue Cohosh is the result of self-pollination.

Native Americans treated a wide range of afflictions with Blue Cohosh, including gallstones, fevers, toothaches and rheumatism. The most common use of its rhizomes, or underground stems, was as an aid to speed and ease childbirth. Even today it still serves this purpose — 64% of midwives surveyed reported using Blue Cohosh to treat women before or during childbirth. It has, however, had deleterious effects on some women and has not been evaluated by the FDA.

Because of the small size of its flower, the brevity of its flowering period, and its rarity (ranked critically imperiled or imperiled throughout its range in New England), Ram’s-Head Lady’s Slipper is notoriously hard to find.  Its preferred habitat is moist, mossy bogs, but it can also be found in mixed woods and uplands.  If you’re fortunate enough to set eyes on one of these orchids, the diminutive size and conical-shape of its flower, compared to other Cypripedium species (Yellow, Pink and Showy Lady’s Slippers), will be strikingly apparent.

The flowers (which appear only if the plant is at least four inches high) mature in mid-May to early June, often developing very rapidly and typically lasting only a week or so. The sepals, lateral petals, and particularly the lower lip, or labellum (pouch made of fused petals), produce a sweet odor to attract potential pollinators, such as small bees.   Once the flower is fertilized, the upper sepal lowers over the opening of the pouch (see insert), excluding additional visitors. Although individual plants can produce copious numbers of minute seeds, reproduction appears to be largely asexual via offshoots of parent plants. 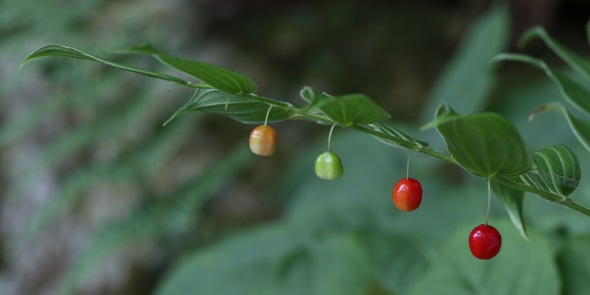 Twisted Stalk’s (Streptopus amplexifolius ) name is very descriptive, for not only are the stems bent slightly where the leaves clasp them, but there is a 90-degree twist in the flower stalk after it emerges from the base of the leaves, causing the flowers to hang down from the stem. Earlier in the summer, delicate, greenish-white, bell-like flowers hung below these leaf axils. Those that were fertilized are currently developing into bright yellow-to-red fruit which make the plant obvious even in the moist, shady woods where it grows. Although considered edible by some, Twisted Stalk (also called Watermelon Berry) can be mistaken for poisonous species of plants so consumption is not recommended. 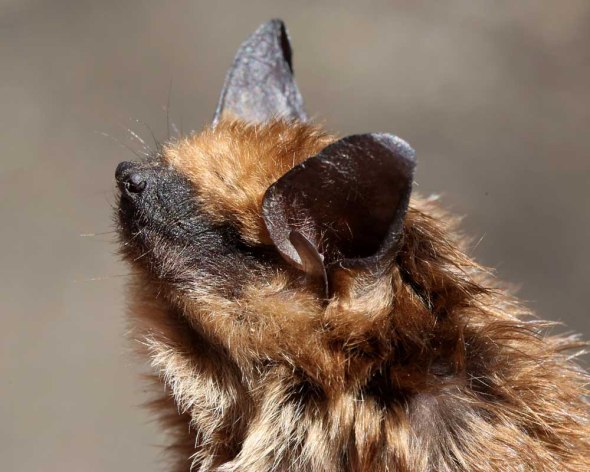 Big Brown Bats have emerged from hibernation and have been active for several weeks. It is in the spring that a female Big Brown Bat becomes fertilized with sperm she has stored in her uterus over the winter. Reproductive female Big Brown Bats collectively form a maternity roost at this time of year and each bat typically gives birth to a single pup in June, after about a 60-day gestation period.

Only two percent of Common Milkweed, Asclepias syriaca, flowers develop into pods, and all the seeds in a pod come from a single flower.

There are only about three short weeks in the late spring when the blossoms of Yellow Lady’s Slippers grace our woodlands and wetlands. The production of an orchid is a complicated process. If pollination and fertilization are successful, hundreds of thousands of some of the smallest seeds of any flowers are scattered by the wind. The seeds of Yellow Lady’s Slippers (and other orchids), unlike those of most flowering plants, contain no food for the seedling plant. In addition, the coating surrounding the seed is extremely tough, so much so that the seed can’t germinate until Rhizoctonia fungi digest the outer coating, which allows the inner seed to access soil nutrients. This can take two years or more and then it may take another few years for the plant to produce a flower.