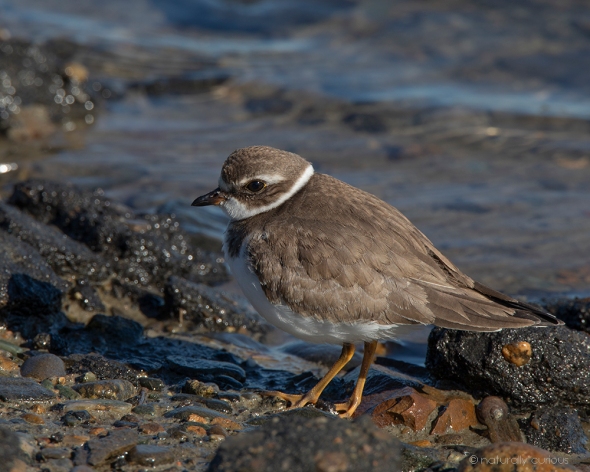 During the peak of their migration in the fall (August and September), Semipalmated Plover sightings occur inland but are especially concentrated along the East coast.  Sightings are decreasing now as we approach the tail end of their flight from their Arctic and sub-Arctic breeding grounds to their wintering grounds which range from the southern U.S. through southern South America.

In general, plovers (Charadriidae) are small to medium-size, plump shorebirds with long wings and short necks and rounded heads.  The Semipalmated Plover, during the breeding season, has a black crown, eye patch and single breast band.  These areas are brown in nonbreeding adults (pictured).

Fortunately, there is no evidence that the estimated breeding population of 200,000 birds is diminishing. According to the Cornell Lab of Ornithology, “The Semipalmated Plover is among the few plovers whose numbers are apparently increasing, perhaps owing to its versatility in food and habitat choice, its wide-spread coastal winter distribution, or its habitat expansion in the sub-Arctic as a result of disturbance by both humans and arctic geese.”

For those curious about this shorebird’s name, “semipalmated” in a wading bird’s name indicates that its toes are webbed for part of their length (barely detectable in photo, but if you look hard you’ll see partial webbing in the left foot). 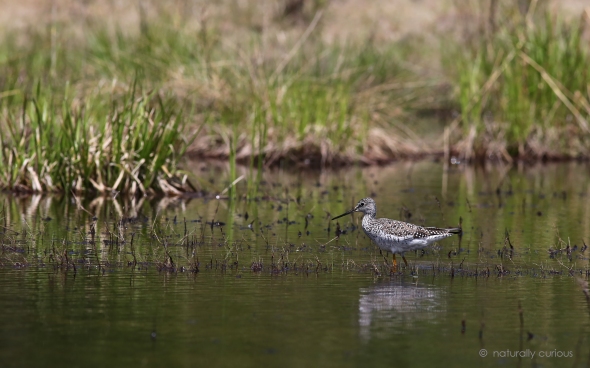 Contrary to what it’s called, the “fall” migration of shorebirds has been underway since early July, and is in full swing, peaking in August. Vermont is home to only a few breeding shorebirds (Killdeer, Spotted Sandpiper, Upland Sandpiper, Wilson’s Snipe, American Woodcock).  Most of the shorebirds we see this time of year are those migrating south after nesting in the Arctic.

Shorebirds move south relatively early compared to many migratory birds, in part, because the breeding season in the Arctic is quite short. In addition, those birds whose first nesting attempt failed tend to migrate soon afterwards rather than attempt a second nesting, due, once again, to the brief Arctic summer. Also, in several species one member of a pair often leaves before the young are full grown, sometimes even before the eggs hatch, leaving the remaining adult to raise the young.

The young of most shorebirds migrate later than the adults.  There can be as much as a month between the peak passage of adults and that of juvenile birds. (Photo:  Greater Yellowlegs) 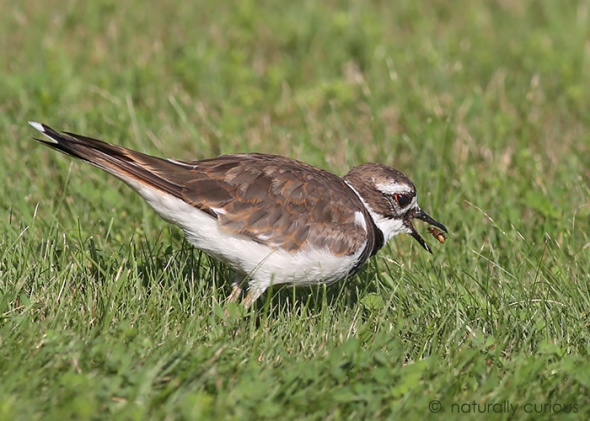 Ninety-eight percent of  a Killdeer’s diet  consists of animal matter.  Beetles, insect larvae, earthworms, grasshoppers and crayfish make up the majority of what a Killdeer eats. In the summer, adult beetles (see photo) and beetle larvae make up almost half of what they consume.

Much of the time we observe Killdeer they are running, stopping, waiting and then running again. This is typical feeding behavior. Another method of obtaining food consists of patting the ground or the bottom of a pond in shallow water with one quivering foot. Killdeer also engage in probing into mud and chasing prey, and they have been known to follow tractors in search of earthworms.

Food normally passes through a Killdeer’s digestive tract in about two hours, but the spore-bearing structures of some ferns that it eats take five to sixty hours. All birds have gizzards, where food is ground up. Some birds swallow grit to aid in the grinding process, and the Killdeer is one of them. It has been proposed that the sporocarps take longer to pass through a Killdeer because they are retained in the gizzard where they function as grit. 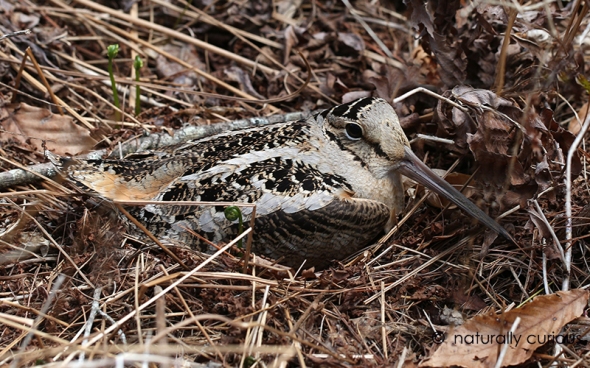 Over the past decade or so, there appears to be a trend of increasingly early American Woodcock arrivals on breeding grounds in Vermont. It used to be that when March arrived, you started looking for the very first returning migrants. Now you need to keep your eyes open for this forest-dwelling shorebird in February.

The start of the Woodcock migration northward and the rate of their progress is said to be greatly influenced by photoperiod and weather. With the unusually warm weather we had in February and early March this year, American Woodcocks, as well as several other migratory species, have been returning earlier than normal. Since their return, we have had early thaws interspersed with hard frosts and several days in a row staying below freezing which created a hard crust on what snow remained. This was followed by a storm that dumped one to two feet of snow on the ground and colder than usual temperatures.

Migration is demanding enough on birds, but those fortunate enough to reach their destination then have to find food and stay warm.  It is most challenging for those species with a fairly limited diet, such as Woodcocks, whose diet consists primarily of earthworms. In a typical year there are frequently brief freezes after Woodcocks return, and even storms that leave several inches of snow. But it warms up relatively quickly and there are usually ditches and wet, thawed areas where long bills can probe the soil for life-sustaining food. Not so this year – a deadly combination of early arrivals and late frigid weather spells disaster for American Woodcocks.

The Raptor Center, a wild bird rehabilitation center in New Jersey, reports that during a recent 24-hour period, they admitted more Woodcocks than in all of 2016. After flying hundreds of miles, these birds are exhausted and very hungry when they arrive on their breeding grounds. Should you find one in distress, you can locate a wildlife rehabilitator that accepts birds (in all states) by going to www.owra.org/find-a-wildlife-rehabilitator .

Special thanks to Maeve Kim and Ian Worley for the data and information in this post. 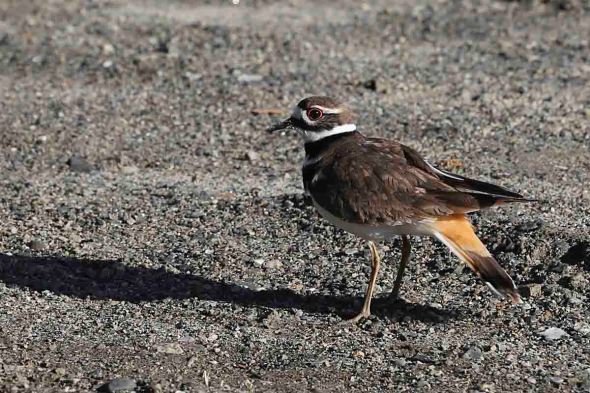 Killdeer that breed in the southern half of the U.S. are year round residents, and do not migrate, but in the northern half of the U.S. killdeer are migratory. Their wintering range extends across the southern tier of states, through Mexico and the Caribbean and along the coastal regions of western South America (Columbia, Venezuela, Ecuador and Peru). Killdeer that breed in the Northeast overwinter in Gulf and southern states that border the Atlantic Ocean.

The first returning killdeer have been sighted in Vermont. While the spring migration of killdeer is early, it is also prolonged, peaking in late March or early April in New England. Killdeer migrate during the day as well as at night, in flocks of 6-30 birds. When they stop to rest and/or forage, the birds typically do not go within 13 to 20 feet of each other, and are met with aggression from other flock members if they do. Once on their breeding grounds, killdeer are even less tolerant of each other. The courtship behavior in one pair often elicits aggressive behavior from neighboring pairs.

Now is the time to keep ears and eyes open for this inland-nesting shorebird. Corn fields, lawns and parking lots are a good place to start. For a perfect example of onomatopoeia, listen to Lang Elliott’s killdeer recording: http://www.langelliott.com/mary-holland/killdeer/ (Sound recording © Lang Elliott – langelliott.com) 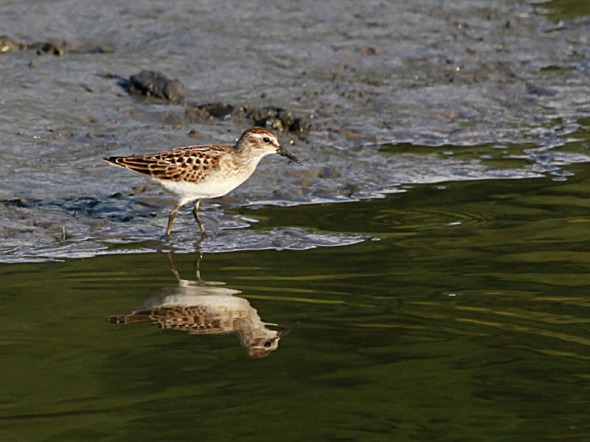 Least Sandpipers are the smallest shorebirds in the world, weighing only an ounce and measuring 5 – 6 inches long. Their fall migration has already begun, with individuals leaving their breeding grounds in the subarctic tundra and far northern boreal forest for their wintering grounds in Central and South America. Banding has revealed that the eastern population of Least Sandpipers undertakes nonstop transoceanic migrations of about 1,800 to 2,500 miles from the Gulf of St. Lawrence and New England to northeastern South America. Not much bigger than a sparrow, this common but declining shorebird can be seen refueling on mud flats throughout New England during its fall migration. 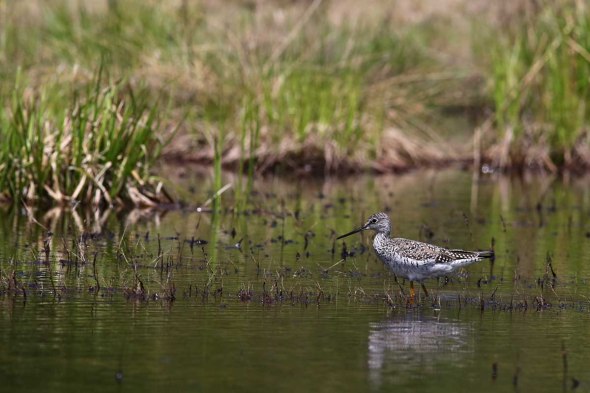 Many of the shorebirds that overwinter in Central and South America, as well as southern North America, migrate through New England during the month of May, on their way north to their Canadian breeding grounds. Although Greater Yellowlegs (pictured) are more solitary than most shorebirds, they tend to migrate in small flocks as they head for the bogs and coniferous forests of northern Canada and southern Alaska. They are recognizable by their upright stance, bright yellow legs and piercing alarm calls (nicknames include “telltale,” “tattler,” and “yelper”). During the early 20th century, before they were protected, Greater Yellowlegs were considered an important game bird, and according to Arthur C. Bent, an ornithologist at the time, this species was often shot “by an angry gunner as a reward for its exasperating loquacity.”