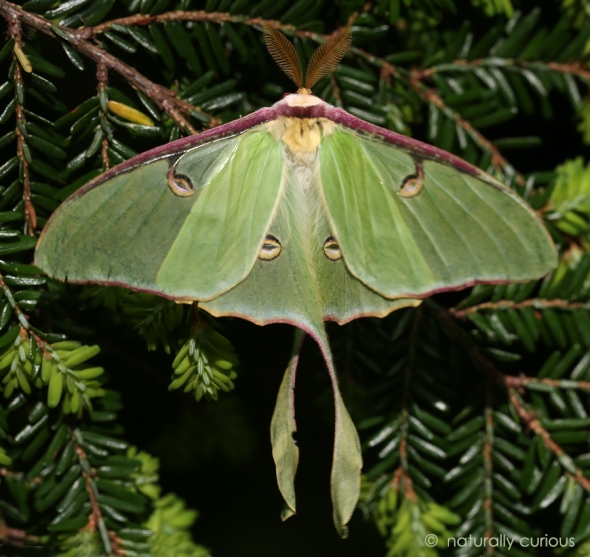 Luna Moths, Actias luna, are known for their hindwings’ beautiful, long, green tails. These tails are not simply decorative, nor is their primary function to attract a mate (pheromones do that). A recent study found that Big Brown Bats have an easier time catching Luna Moths that have lost their tails. Further research revealed that Luna Moths defend themselves from voracious bats patrolling the night air by spinning the tips of their two wing tails in circles. The twisting tails of the moth act like a sonar shield, interfering with the bat’s means of locating them – echolocation. In contrast with the stronger, ever-changing echoes coming off of the moths’ large flapping wings, the twisted shape of the tails create a persistent weak echo signal. According to researchers, this could make the insects trickier to catch, and harder to track as they fly.

Big Brown Bats have emerged from hibernation and have been active for several weeks. It is in the spring that a female Big Brown Bat becomes fertilized with sperm she has stored in her uterus over the winter. Reproductive female Big Brown Bats collectively form a maternity roost at this time of year and each bat typically gives birth to a single pup in June, after about a 60-day gestation period.