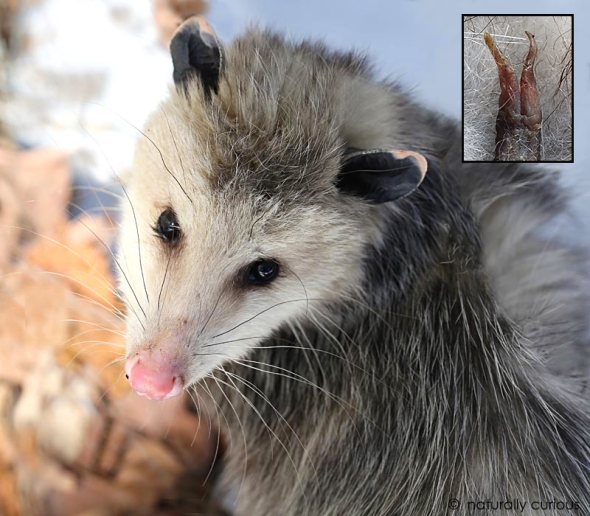 If you see a Virginia Opossum in your travels, it could well be on the hunt for a mate at this time of year. It’s even possible you may hear one if you are close enough and the timing is right, as male opossums attract females by making clicking sounds with their mouth.

The breeding practices of this marsupial are unusual, to say the least. The male opossum has a bifurcated (two-pronged) penis (see photo inset), and the female has two vaginas. Not only is their reproductive anatomy somewhat unusual, but the behavior of their sperm is as well. During maturation, sperm pair up inside the male reproductive tract and remain paired after entering the female. Just prior to fertilization the sperm pair separate (into two spermatozoa). This phenomenon occurs only in American marsupials, and not Australian. No definitive explanation exists for this, but perhaps paired sperm increase motility in the female reproductive tract.

(NB: Having an opossum on your land is a real asset – according to biologist Richard Ostfeld, one opossum can kill and eat some 5,000 ticks in a single season. Opossums are said to destroy roughly 90 percent of all the ticks they encounter.)