Congratulations to Stein, the first person to correctly identify Monday’s Mystery Photo as the cocoon of a Polyphemus Moth!

The Polyphemus Moth is one of our giant silk moths, spinners of the largest cocoons in North America.  Leaves are often woven into the surface of the cocoon in which the Polyphemus pupa spends the winter.  Unlike most other giant silk moths’ cocoons, the Polyphemus Moth cocoon lacks an escape “valve” at one end. In order to emerge (as an adult) from the cocoon the summer after it spins it, the moth secretes an enzyme that digests and softens the silk at one end. Then it moves about the cocoon in a circular pattern, tearing the softened silk with two spurs located at the base of each wing on its abdomen. Eventually it escapes by splitting the silk and pushing the top up. 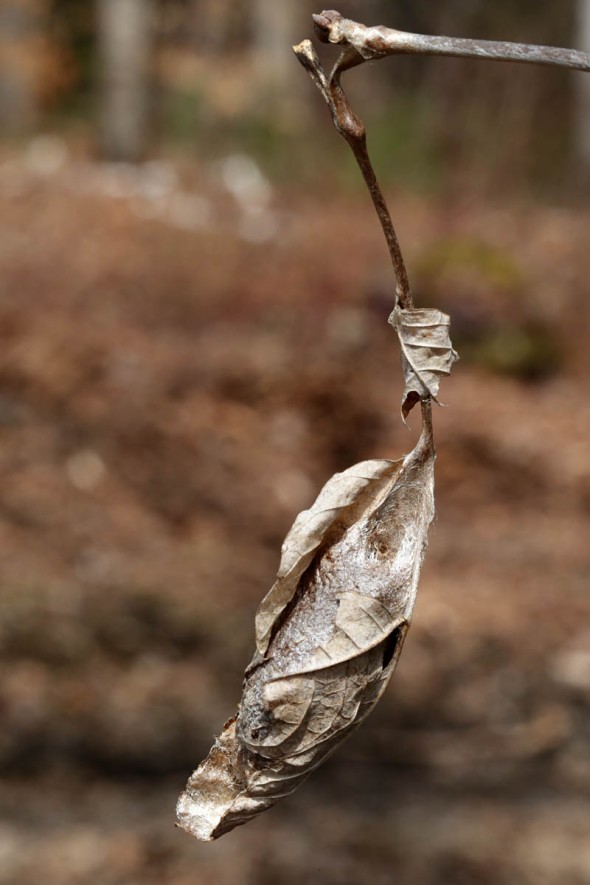 When a Promethea Moth caterpillar, one of our giant silk moths, is ready to pupate at the end of the summer, it strengthens the stem, or petiole, of a leaf on its host plant with silk and then attaches the silk to a nearby branch, assuring that the leaf will remain attached to the tree. (Imagine having the instinctive foresight in your youth that this caterpillar had!) The caterpillar then curls the leaf around itself and spins its cocoon inside the curled leaf. The cocoon dangles from the host plant throughout the winter and in early summer the moth emerges. Now is the perfect time for finding a Promethea Moth cocoon, as last year’s leaves are gone on most trees, and this year’s buds have yet to open. Look for a tree or shrub that has just one dead leaf hanging from one of its branches. (Cecropia caterpillars favor black cherry, poplar, ash, maple, oak and willows trees among others.)

Sawflies are often mistaken for wasps, but there are subtle differences in appearance, including the thick “waist” of a sawfly compared to the threadlike waist of a wasp.  Their common name comes from the females’ sawlike ovipositor which they use to cut into plants and lay their eggs.  Certain species of sawflies overwinter as pupae inside cocoons that they attach lengthwise to twigs.  These cocoons are fairly small (the pictured cocoon is just over ¼” long).  Sawfly cocoons persist even after the adults emerge in the spring, as they are made of very tough material.   Look for capped cocoons during late fall and winter, and empty cocoons, sometimes with the cap still attached, the rest of the year.

Most tussock moths, such as this Hickory Tussock Moth (Lophocampa caryae), are densely covered with hair-like structures called setae that bear microscopic barbs.  Many people are sensitive to these setae and get an itchy rash if they handle a Hickory Tussock Moth.   Even touching the cocoon of a tussock moth can cause irritation, as the setae are woven into it.  Many tussock moths display warning coloration with their black, white, red, orange or yellow setae.  What looks like two Hickory Tussock Moth larvae in the photograph is actually one adult caterpillar (left) and its shed skin (right).   You can find these larvae feeding on hickory, walnut, ash, oak and many other trees in the woods right now.  After spending the winter pupating in a cocoon in the leaf litter, a small spotted, tan moth emerges.

If you’ve never heard of a Spongilla Fly, you’re not alone. We don’t see its larval stage, as it lives under water, where it feeds exclusively on fresh water sponges. You can find these sponges living in the still waters of large rivers, lakes and wetlands. The beautiful silken net, as well as the small cocoon inside the net, are created by a Spongilla Fly larva after it crawls out of the water and chooses a spot on land on which to pupate (in this case on a seat cushion). The entire structure is less than ¼” in diameter.