The signs of fall are plentiful – skeins of migrating geese, disappearing insects, falling leaves.  Another transformation that takes place in the fall (as well as spring) with White-tailed Deer and other mammals is the molting of a summer coat and the growing in of a winter coat.

The thinner summer coat of a White-tailed Deer consists of shorter, reddish hair.   The shorter length of the hair allows the deer’s body heat to easily escape and the light color reflects rather than retains warmth from the sun.  Come fall, deer molt the rusty red hairs of summer, and replace them with a coat consisting of longer, darker hairs. This grayish-brown hair is warmer and absorbs more of the sun’s warmth. A spring molt occurs in reverse.

The process of molting happens relatively fast and is often completed within two to three weeks.  During this period, deer can look a bit ragged (see photo), as both the red summer hairs as well as the brown winter hairs are evident. If you see a deer at this time, it’s easy to assume that such a deer has mange, but it is just the way a seasonal molt takes place. (Photo by Erin Donahue)

When Common Loon chicks first hatch, they are covered with down and look like sooty black puffballs.  These feathers are pushed out when the loons are 10 to 14 days old by a second plumage of brownish-gray down feathers.  When the young are about a month old, these feathers start to be replaced by juvenal contour feathers. By the time the young loons are 10 or 11 weeks old, their down feathers are mostly gone and their juvenal plumage is nearly complete. This plumage is very similar to the winter plumage of adult loons. You can tell the difference between the two by the whitish-gray tips of the juveniles’ feathers, which the adults lack.  (Pictured juvenile loon is about seven weeks old, showing remnants of the second down plumage.)

Molting, the replacement of all or some of a bird’s feathers, occurs in response to a mixture of hormonal changes brought about by seasonal changes. This process serves to replace worn feathers (they cannot repair themselves) and can play a part in seasonal camouflage as well as attracting a mate.

All of our small songbirds have a complete molt, replacing all of their feathers in late summer. In addition, many species have a partial molt (replacing body feathers but not wing or tail feathers) in the spring.

According to David Sibley, American Goldfinches begin to molt all of their (alternate/breeding plumage) feathers in September, with the males replacing their brilliant gold feathers with much duller feathers by November.  Come spring and the breeding season, male goldfinches replace their dull (basic/non-breeding) body feathers (but not the wing or tail feathers) with new, bright feathers.

Birds Molting Old Feathers And Growing In New Ones

With birds, molting refers to the loss of old, worn feathers and the growth of new ones.  A molt can involve all of the bird’s feathers (complete molt), or just some of them (such as wing or tail feathers – a partial molt). Most birds have a complete molt once a year (chickadees, hummingbirds, owls, etc.), or one complete molt and a partial molt before the breeding season (buntings, tanagers, warblers, etc.), or two complete molts per year (Bobolinks, Marsh Wrens).

Complete molts often occur in late summer and early fall, after the breeding season is over. When you think about it, the timing of this “prebasic” or “postnuptial” molt makes a great deal of sense. Growing new feathers takes an inordinate amount of energy; food is plentiful now, the demands of breeding are over and for many birds, migration isn’t quite under way. It is the perfect time to look for molted feathers on the ground.  (Photo:  molted Red-tailed Hawk tail feather) 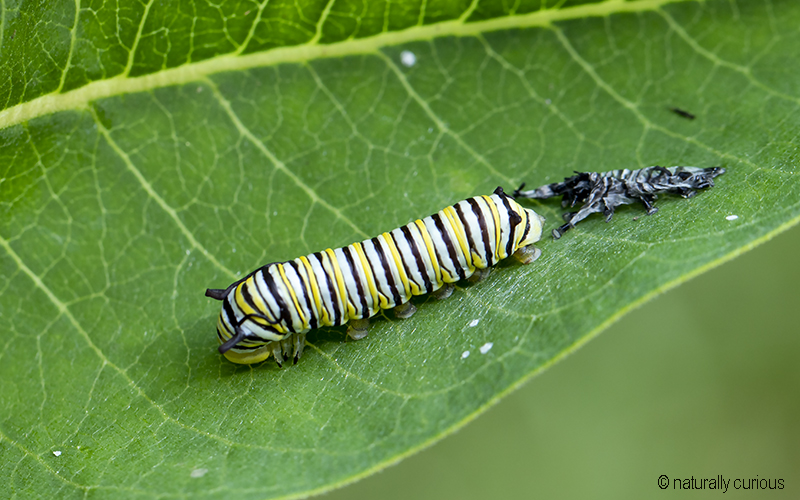 The larval stage of a butterfly or moth is spent doing little but eating.  Only as a caterpillar will these insects have chewing mouthparts, and they waste no time in using them. As they eat, caterpillars increase in size and their skin (exoskeleton) becomes tighter and tighter, as it doesn’t grow larger.  The caterpillar grows a new, larger exoskeleton underneath the outer skin and then sheds, or molts, the old one. Most caterpillars molt five times.  At first, the new exoskeleton is very soft and not very protective, but it soon hardens. The shed exoskeleton is often eaten before the caterpillar ingests more plant food.

The Monarch in the photograph is a very new 4th instar instar caterpillar (see antennae which haven’t hardened).  It has shed three times.  Its third exoskeleton (which it has just shed) is on the milkweed leaf behind the caterpillar. To see a real-time video of a Monarch molting go to   https://www.youtube.com/watch?v=EbHyq3RwtxI.

(Thanks to Otis Brown for his keen eye in finding this Monarch caterpillar before it ate its just-molted skin.  Also to Ba Rea ((www.basrelief.org) for her instar confirmation.) 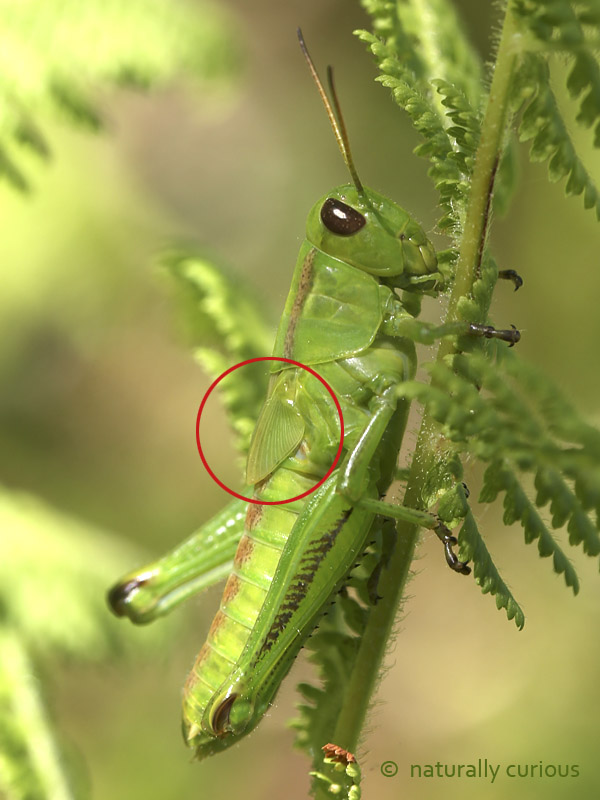 Grasshoppers experience incomplete metamorphosis, with three life cycle stages – egg, nymph, and adult.  A grasshopper egg hatches into a nymph, which resembles an adult grasshopper, except that it is smaller and lacks wings and reproductive organs.  Because of its hard outer exoskeleton, a growing grasshopper has to shed its skin periodically to accommodate its increased size.  (A larger exoskeleton develops beneath the old, smaller one that is shed.) Grasshopper nymphs molt several times (each stage between molts is referred to as an instar) before they reach their adult size, and with each molt, their “wing buds” get larger.  After the final molt, the wings are inflated and become fully functional.  Wings play an important part in grasshopper courtship, as males “sing” to attract females by rapidly rasping their leg against their forewing, a process called stridulation. 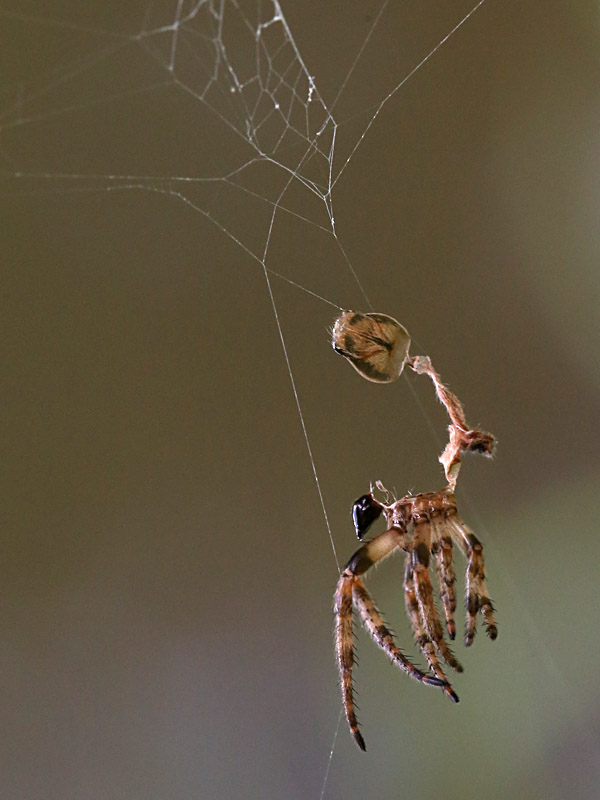 Like other arthropods, spiders have a protective hard exoskeleton that is flexible enough for movement, but can’t expand like human skin. Thus, they have to shed, or molt, this exoskeleton periodically throughout their lives as they grow, and replace it with a new, larger exoskeleton. Molting occurs frequently when a spider is young, and some spiders may continue to molt throughout their life.

At the appropriate time, hormones tell the spider’s body to absorb some of the lower cuticle layer in the exoskeleton and begin secreting cuticle material to form the new exoskeleton. During the time that leads up to the molt (pre-molt period), a new, slightly larger, inner exoskeleton develops and is folded up under the existing exoskeleton. This new soft exoskeleton is separated from the existing one by a thin layer called the endocuticle. During the pre-molt period the spider secretes fluid that contains digestive enzymes between the new inner and old outer exoskeletons. This fluid digests the endocuticle that separates the two exoskeletons, making it easier for them to separate.

Once the endocuticle is completely digested the spider is ready to complete the molt. At this point a spider pumps hemolymph (spider blood) from its abdomen into its cephalothorax in order to split its carapace, or headpiece, open. The spider then slowly pulls itself out of the old exoskeleton through this opening.