Some Northeastern nesting birds, such as hummingbirds and warblers, are strictly migrators. If they were to remain, they would not find enough food to sustain themselves over the winter months.  Nut and seed-eating birds, including jays and chickadees, don’t have quite the challenge as insect and nectar feeders. Food is continually present (along with some caching strategy in the fall) making a perilous migration unnecessary.  There are still other birds, including the Eastern Bluebird, that are known as “partial migrants.”  Some individuals migrate and some spend the winter near or on breeding sites.

Those bluebirds that remain in the Northeast supplement their mostly insect diet with small fruits. In addition, they have also adapted behaviorally to the demands of winter.  Communal roosting in holes in trees and other cavities of two to several dozen individuals during particularly cold nights conserves warmth.  And during especially cold days, bluebirds retreat to heating sources such as chimney tops of gas-burning stoves. (Photo: female Eastern Bluebird)

The colors in the feathers of a bird are formed in two different ways, from either pigments or from light refraction caused by the structure of the feather. Red and yellow feathers get their color from actual pigments (carotenoids) that come from the bird’s diet. Blue, however, is a structural color, created by the way light waves interact with the feathers and their arrangement of protein molecules, called keratin.

Thus, no birds have blue feathers made from pigments – they are blue strictly from the structure of the feathers.  Different keratin structures reflect light in subtly different ways to produce different shades of what our eyes perceive as the color blue.

If you observe the blue feather of an Eastern Bluebird, Blue Jay or Indigo Bunting in normal lighting conditions you will see the expected blue color. However, if the feather is back-lit, and the light is transmitted through the feather, it will look brown. The blues are lost because the light is no longer being reflected back and the brown shows up because of the melanin in the feathers.

Different species of birds have different numbers of broods (sets of eggs/young).  Eastern Bluebirds can have up to four broods per breeding season, American Robins up to three and Eastern Phoebes often two.  Chestnut-sided Warblers typically only raise one family in a summer. If weather or predation destroys their first attempt, however, they will re-nest, which is just what the pictured female Chestnut-sided Warbler is doing.

By August, a majority of birds have raised their young, but there are birds that nest late in the season, some naturally (American Goldfinches) and some, such as this Chestnut-sided Warbler, by necessity.  Where birds nest, geographically, affects the number of broods they have. Birds nesting at higher latitudes tend to produce fewer broods per year.  Because it gets colder earlier than further south, there is less time to raise their young.  In warmer regions, birds often raise two or even three broods per year. (Thanks to Dean and Susan Greenberg for photo op.)

The sun was warm but the wind was chill.
You know how it is with an April day.
When the sun is out and the wind is still,
You’re one month on in the middle of May.
But if you so much as dare to speak,
a cloud come over the sunlit arch,
And wind comes off a frozen peak,
And you’re two months back in the middle of March.

A bluebird comes tenderly up to alight
And turns to the wind to unruffle a plume,
His song so pitched as not to excite
A single flower as yet to bloom.
It is snowing a flake; and he half knew
Winter was only playing possum.
Except in color he isn’t blue,
But he wouldn’t advise a thing to blossom.

There are roughly 85 species of North American birds that are cavity nesters – birds that excavate nesting holes, use cavities resulting from decay (natural cavities), or use holes created by other species in dead or deteriorating trees.   Many of them get a jump start on open-nesting birds, due to added protection from the elements. Barred owls, titmice, chickadees, wood ducks, woodpeckers, bluebirds, mergansers – many have chosen a nest site and are busy excavating, lining a cavity or laying eggs long before many other species have even returned to their breeding grounds.

The reduced risk of predation a cavity nest experiences is reflected in several ways:  many cavity-nesters have larger clutches of eggs than open-nesting birds and cavity-nesting young also spend a relatively longer period of time in the nest before fledging. When in the woods, keep an eye out for snags (standing dead trees) and stumps, for they provide housing for many cavity-nesting birds.  (Photo: Black-capped Chickadee removing wood chips from the cavity it’s excavating in a rotting stump.)

There are many birds, such as waxwings, that have a frugivorous (strictly fruit-eating) diet.  The only time they usually expand their diet to include insects is during the breeding season, when growing hatchlings require high amounts of protein for proper development.  Others, such as orioles, show a marked preference for fruit but also eat significant quantities of other foods.  All of these birds play an important role by spreading fruit seeds to distant areas either by caching food or distributing the seeds through their droppings.

Eastern bluebirds are preparing for the first of the two or three broods they will raise this summer.  Contrary to what those of us who clean out our bluebird boxes have been led to believe, Cornell Lab of Ornithology states that experiments show preferences for nesting boxes containing old nests. In a paired experimental design bluebirds chose boxes containing old nests in 38 of 41 cases in which boxes with old nests were paired with empty ones.  Scientists conjecture that this may be because the old nests often contain wasp larvae, an easy source of food for the bluebirds.

Females build their nest over several days.  Grasses and pine needles are gathered from the ground and delivered to the nest box.  Fine grasses, horse hair and turkey feathers often provide the soft, innermost lining of the nest.  While the male enters the box during the nest-building process, perhaps to inspect, he does not actively collect material or participate in the building of the nest. Once the 3 – 7 eggs are laid, the female spends the next two weeks or so incubating them.  She then broods the young for about a week, and both parents provide them with food for up to three weeks after the young have fledged. (Thanks to Jeannie Killam and Terry Ross for photo op.)

Nest Box Residents : Out With The Old, In With the New

In order to prevent disease or the passing on of parasites, it is a good idea to clean out nest boxes after they’ve been occupied.  In the fall, after the last brood of eastern bluebirds or tree swallows has flown the coop, many nest box owners often clean them out in preparation for the next summer’s residents, but some wait until spring.  This habit of waiting provides white-footed and deer mice (and occasionally flying squirrels) with a ready-made winter shelter and/or larder.

Feathers incorporated into the pictured grass nest indicate that tree swallows once occupied this nest box.  After the last of the avian nestlings had fledged, mice moved into the box.  After constructing a roof over the nest, the mice succeeded in renovating the former bird nursery into a winter mouse house.  The remaining space inside the box served as a larder for nearby high-bush cranberries.

Unfortunately for the mice, but fortunately for the swallows or bluebirds that will reside here this summer, the responsible nest box owner dutifully cleaned out the nest box this spring, in accordance with avian-mammalian timeshare policies.  (Thanks to Jim Lafley for the use of his photo.)

Some of the most prolific flowering shrubs in the Northeast are dogwoods. In the spring, their flowers attract attention and at this time of year their colorful fruit stands out. There are many species of dogwood, two of which are Red-osier Dogwood (Cornus sericea) and Silky Dogwood (Cornus amomum). These two shrubs can be hard to tell apart, as they both have white flowers, red stems and similar foliage. In the fall, however, the color of their fruit differs, as does their pith, or central stem tissue. The mature berries of Red-osier Dogwood are dull white and its pith is also white. Silky Dogwood’s blue berries have white blotches, and its stem and branches have a salmon-colored pith.

Winterberry (Ilex verticilatta) fruits mature in late summer and early fall, but they are much more evident now that most of the leaves have fallen off this deciduous member of the Holly family. Because these shrubs are dioecious (male and female flowers appear on separate plants), only the female shrubs bear fruit. The bright red berries often persist through the winter and provide cedar waxwings, bluebirds and robins with food long after most fruit has disappeared. 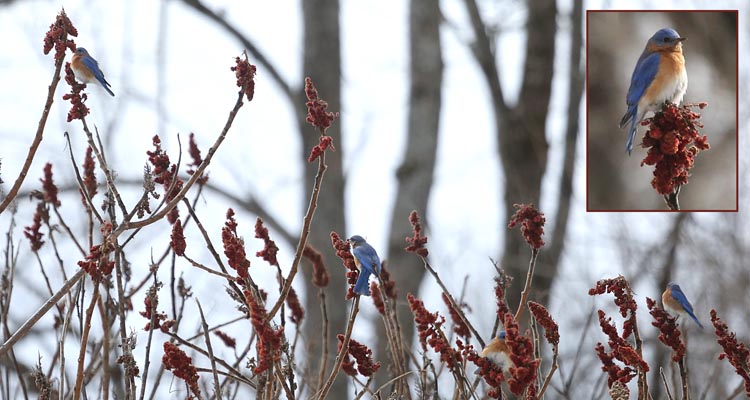 By this time of the year fruit-eating birds have, for the most part, devoured the choicest fruits available in winter. What remains are the fruits-of-last-resort. While Staghorn Sumac fruits may not be a preferred food, they are an important source of winter sustenance for many species of birds, including bluebirds (pictured), cardinals, chickadees, jays, robins, waxwings, crows, mockingbirds and starlings. Some of the best late-winter birding occurs near stands of this shrubby relative of poison ivy. Can you find the four Eastern Bluebirds feeding on sumac in the photo?