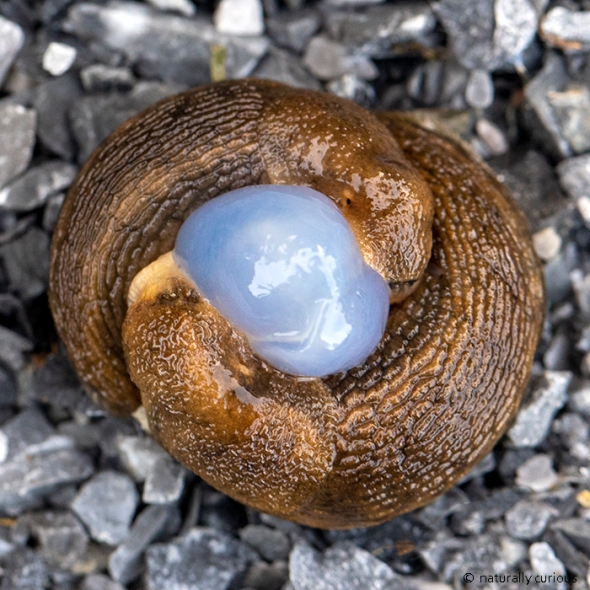 Monday’s post stated that the nature of the activity the slugs were engaged in was undetermined.  Since then it has come to my attention that had I been truly “naturally curious” and popped the bubble of slime, I would have had the rare opportunity of seeing two entwined slug penises.  Here is a descriptive quote describing slug reproduction.

“Like all slugs, those in the genus Arion are hermaphrodites (possessing both male and female sex organs). They can reproduce either by self- or cross-fertilization, depending upon conditions and habitat stability. When two slugs mate with each other, they each simultaneously play the role of both sexes, exchanging sperm with their male genitalia. At times, the male sex organs of two slugs become entangled during mating and the slugs may bite them off in order to free themselves, a not uncommon sacrifice known as ‘apophallation.’ From then onward, the apophallated slugs are only able to reproduce as females. Arion subfuscus mates in the mid-to-late summer. Several days after mating, slugs will lay hundreds of 3-4 mm eggs in the soil, and die shortly thereafter. Although there is no parental care in this species, the eggs are imbued with a caustive agent called miriamin that serves in a large part to protect them from predation. In around a month, the juveniles hatch as small, pale-brown versions of their adult selves. They typically take at least 4-6 months to achieve sexual maturity, mating and dying themselves before the new generation hatches from the eggs.” (https://www.projectnoah.org/spottings/1952620518)

Most of us who have encountered slugs know that if you handle one, the slime it produces on the lower surface of its body persists on your hands even when you wash them with soap and water. (If you let the slime dry and rub your hands together, it will come off in small beads.)  Slug slime contains water, mucus and salts. It keeps a slug’s skin moist, preventing it from drying out, and aids in locomotion.

Slug slime changes as the slug moves. Initially it has the consistency of a liquid gel.  It is solid at rest and turns to liquid under pressure.  A slug sticks part of its body to the ground with its slime, uses its muscles to move its body forward, and then pulls its body away from where it was stuck. More slime is released and the process is repeated.  It’s interesting to note that slugs are strong enough to move without the aid of slime, but nonetheless are always producing it.

Slug slime has its good and bad points. Scientists are studying slug slime properties in their search for a better surgical adhesive. Most substances are either flexible or sticky, not both, like slime.  On the other hand, there are some aspects of slug slime that are not all that appealing.  In addition to being next to impossible to remove from your hands, slug slime can carry rat lungworm (Angiostrongylus cantonensis), a parasitic roundworm that mainly lives in rodents such as rats and can infect slugs (and snails) that come into contact with infected rodent feces.  This disease can cause a form of meningitis which is prevalent in Southeast Asia and tropical Pacific islands.

(Photo:  Two slugs & bubble of slime. Nature of activity not determined! Thanks to Alice Trageser and Mary Landon for photo opportunity.)

Naturally Curious is supported by donations. If you choose to contribute, you may go to http://www.naturallycuriouswithmaryholland.wordpress.com  and click on the yellow “donate” button. (NB:  The “Donate” button on the Naturally Curious blog is currently not working. If you would like to donate to the sustainability of this blog, you may send a check made out to Mary Holland to me at 505 Wake Robin Drive, Shelburne, VT  05482.  Thank you!)