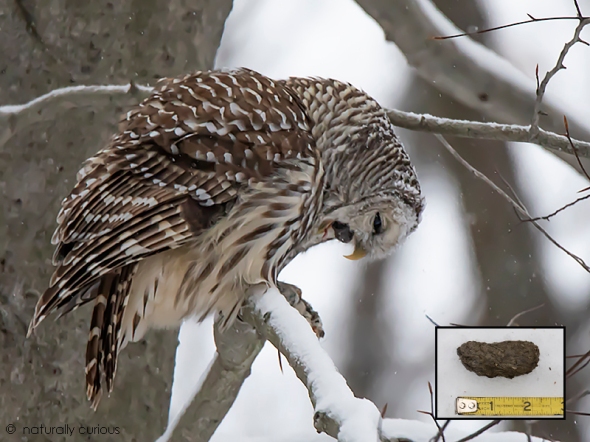 Most owls do not bother to tear small prey such as mice and voles apart but instead swallow them whole.  After eight to sixteen hours, all the nutrients available in the eaten prey have been absorbed by the bird.  Owls cannot digest the fur, feathers, bones, teeth and nails of their prey, so these parts remain in the bird’s gizzard (specialized organ that grinds up food in most birds but serves as a filter for holding indigestible parts in birds of prey).  This accumulation of indigestible parts takes on its pellet form (which is the shape of the gizzard) about eight hours after ingestion, but is sometimes retained by the owl for another six hours or so before being coughed up. As a rule, bones are on the inside of the pellet, and the fur and feathers form a soft coating on the outside.

The stored pellet partially blocks the entrance to the digestive system so it must be ejected before the owl can eat again.  This process takes anywhere from a few seconds to several minutes.  The owl appears to “yawn” several times before regurgitating the pellet.  Note that the pictured Barred Owl has prey (a Deer or White-footed Mouse) in its talons, but out of necessity is getting rid of a pellet before devouring it.

Naturally Curious is supported by donations. If you choose to contribute, you may go to https://naturallycuriouswithmaryholland.wordpress.com  and click on the yellow “donate” button 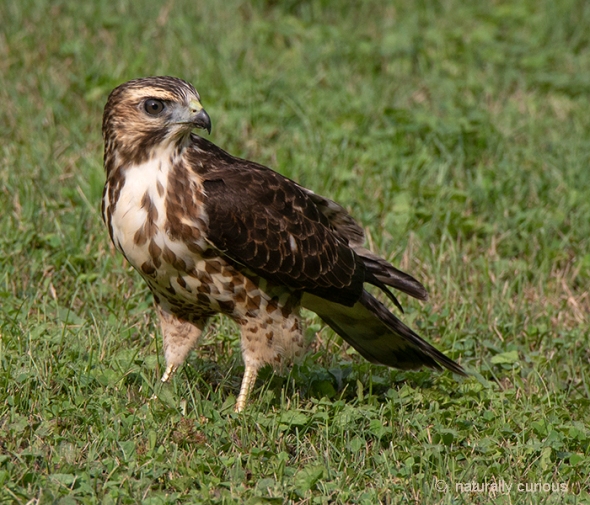 The migration of raptors has begun, and one of the first species to migrate in the fall is the Broad-winged Hawk (Buteo platypterus). While it is quite secretive when nesting, it is one of the more conspicuous species of birds when migrating.  This is for two reasons. They are one of the few North American raptors that flocks during migration, and much of their migratory behavior is concentrated in the Northeast in a two-week period around the middle of September.

Migrating Broad-wings conserve energy by frequently soaring in thermals and mountain updrafts. Flocks of birds, or “kettles”, soar up the heated columns of air, peel off and glide to the next thermal where they repeat the process. Very little wing-flapping is necessary in order to cover a lot of ground. The flocks, or “kettles,” range from several individuals to thousands of birds (larger kettles generally occur nearer their Central and South America wintering grounds).

The number of birds migrating often grows following a cold front, when winds die down and thermals increase. Fall migration of Broad-wings in the Northeast is associated with good visibility, moderate favorable winds, high temperatures, and afternoons (vs. mornings). (Photo: juvenile Broad-winged Hawk) 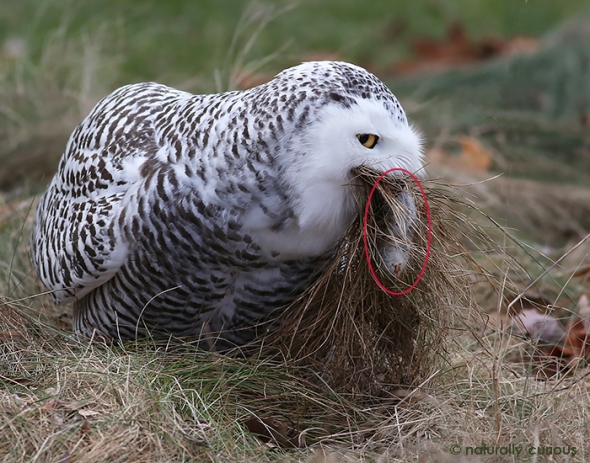 Young Barred Owls are fed from the time they hatch (four to six weeks old) until late summer or early fall, months after they have fledged and long after they are capable of flight. When first out of the nest, the fledglings cannot fly, and thus are totally dependent upon their parents’ continued delivery of prey. The fledged young initially stay near one another and the nest site. The parents continue to feed them, and as the young become more mobile they slowly move away from the nest tree. Flight is attempted between the ages of 12 and 15 weeks. The first attempts are, as you would imagine, rather awkward, but as their wings strengthen, the young owls’ flying skills improve. Even so, the parents continue to feed them through the summer and often into the fall, when prey deliveries slow down and eventually cease, forcing the young to disperse. (Photo: Recently-fledged Barred Owl chick eyeing the Flying Squirrel its parent is delivering.) 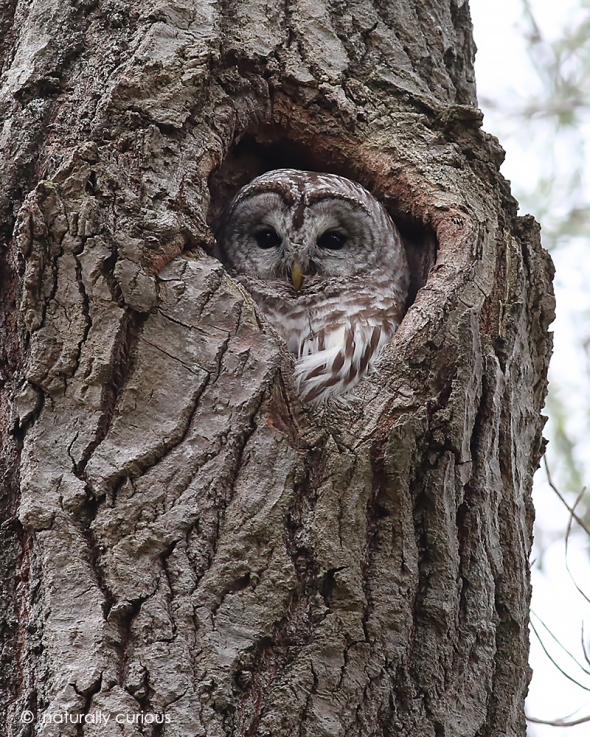 For about a month the female Barred Owl sits on her 1-5 eggs (usually 2 or 3) until her white, downy chicks hatch, usually around the end of April or beginning of May. At about two weeks (mid-May) their natal down is being replaced by a white-tipped gray-buff secondary down, and primary feathers are beginning to grow in.  They remain in their cavity nest for their first month.

It is pretty safe to assume that the adult owl in this photograph is a female as she is in constant attendance during the chicks’ first two weeks. The male brings her food which she tears into little bits so the chicks can swallow it. At the beginning of the third week, the female begins leaving the nest frequently to hunt. When she is at the nest, she often takes breaks from the kids and sits at the entrance surveying her surroundings.  At this point the chicks start consuming prey (that is delivered to them) on their own. In a week or two the chicks will also start appearing at the cavity entrance.  By their fourth or fifth week, the still-flightless chicks will leave the nest, but parental provision of food continues until fall.

Using their keen eyesight and sense of hearing, Barred Owls typically sit and perch on a branch, surveying the ground beneath them for whatever morsel appears, small mammals and birds being at the top of their list during the winter, with more emphasis on amphibians, reptiles, fish and invertebrates during the warmer months.

Several times I have observed a Barred Owl taking advantage of a vernal pool that was teaming with life, specifically Wood Frogs and Spring Peepers. Perched in a nearby tree, the owl kept an eye out for any sign of movement in the water.  When ripples appeared near the shore it would swoop down to the water’s edge in an attempt to grasp a frog with its talons. Although it met with repeated failure, success was inevitable due to the plethora of distracted mating frogs.

Because they lack hair and feathers, frogs may be underestimated when scientists dissect owl pellets to see what Barred Owls eat. Given the frequency with which I have observed these feathered fishermen, I would think that might be very likely.