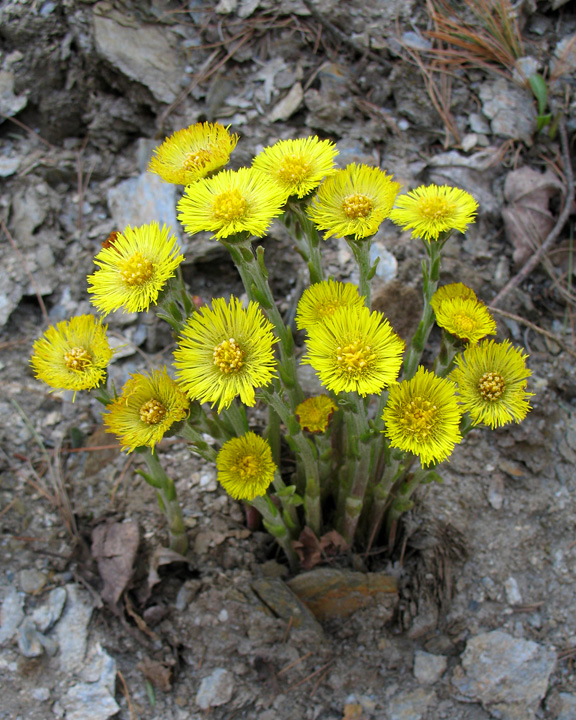 The bright yellow splashes of Coltsfoot (Tussilago farfara) amidst the drab brown landscape this time of year are eye-catching, to say the least. Like Hepatica, Coltsfoot began blooming about a month early this year. Easily mistaken for a Dandelion, Coltsfoot usually flowers first, and unlike Dandelion’s leaves which appear before the flowers area evident, Coltsfoot’s leaves don’t appear until seeds have set. 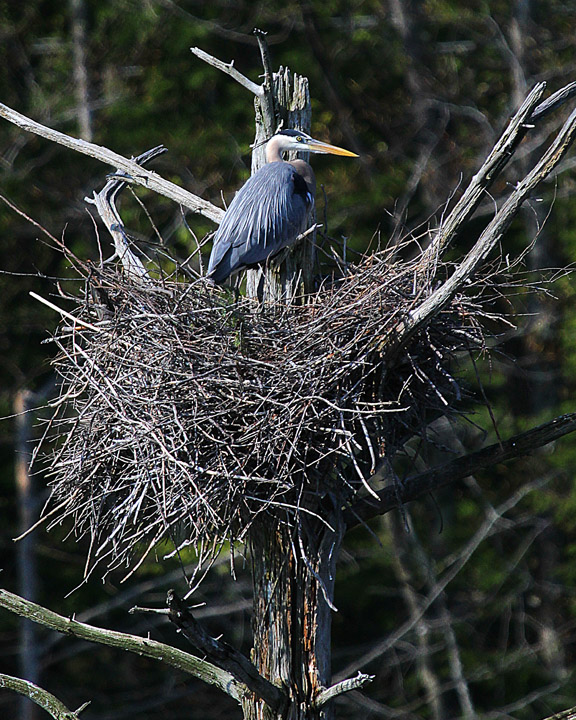 Great Blue Herons are returning to their breeding grounds in northern New England, where they typically nest in colonies.  Unlike the nests of songbirds, heron nests are re-used year after year.  While an individual heron does not usually choose the same nest every year, they usually return to the same colony.  While some colonies are active for only a few years, some have been known to be active for over 70 years.  Because nests can be located up to 100 feet high in a tree (typically a dead snag in the Northeast), you rarely have a bird’s eye view of nesting activity.  However, if you go to Cornell’s new live great blue heron web cam site (http://www.allaboutbirds.org/page.aspx?pid=2433 ) you can see every movement made by the great blue herons currently nesting in Sapsucker Woods in Ithaca, NY. 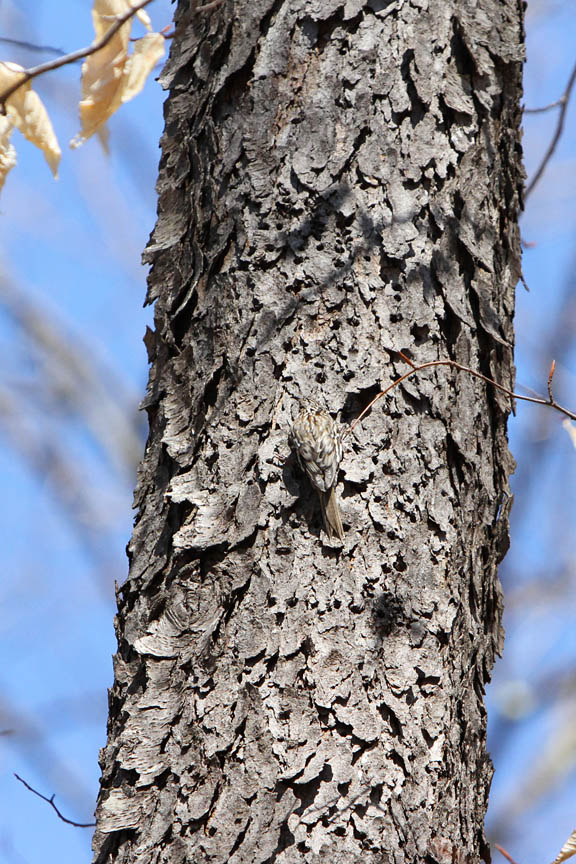 Can you find the brown creeper that’s on the trunk of this black cherry tree? This is cryptic coloration, a form of camouflage in which an animal blends into its environment, at its finest.  A forager of insects and spiders tucked away behind and in the crevices of bark, the brown creeper starts its search at the base of a tree, climbing upward and often spiraling around the trunk until it nears the top.  It then flies to the base of a nearby tree to begin the process again. As W.M.Tyler wrote in 1948 in Bent’s Life Histories of N.A. Birds, “The brown creeper, as he hitches along the bole of a tree, looks like a fragment of detached bark that is defying the law of gravitation by moving upward over the trunk, and as he flies off to another tree he resembles a little dry leaf blown about by the wind.” 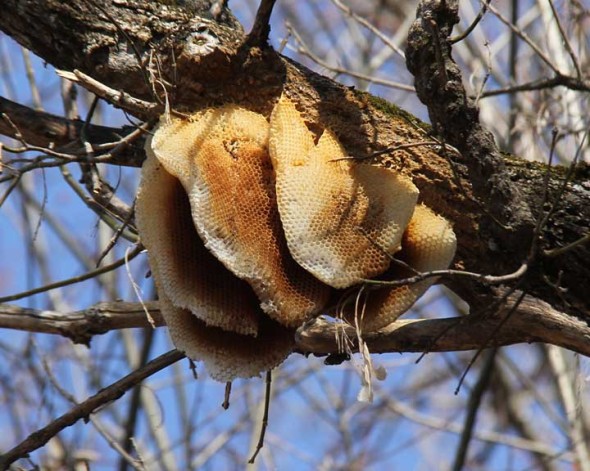 Rarely do you see or hear about honeybees attempting to construct a hive outdoors that isn’t inside a hollow “bee tree” or in a rock crevice.  Occasionally they do attempt it, but as the empty cells in this exposed comb attest to, honeybees aren’t likely to make it through a Vermont winter without some shelter for their hive, even a winter as mild as the one we just experienced. 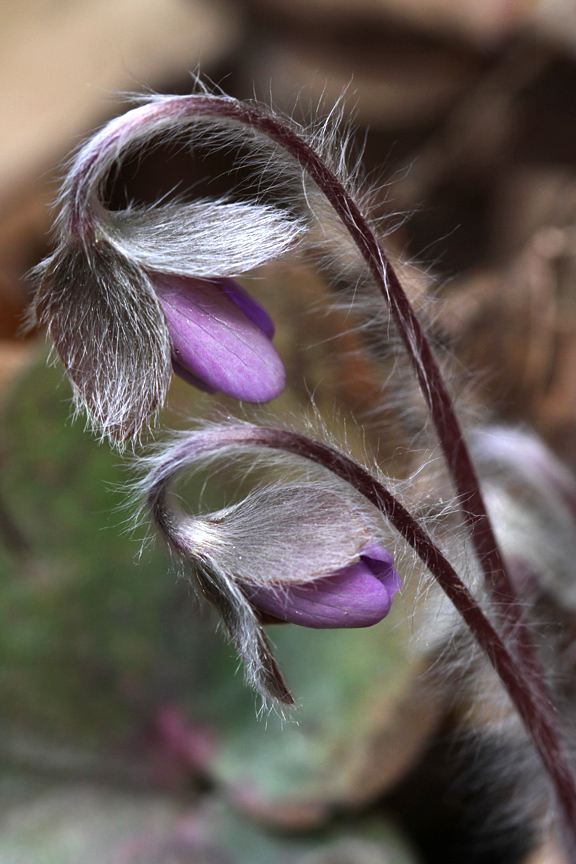 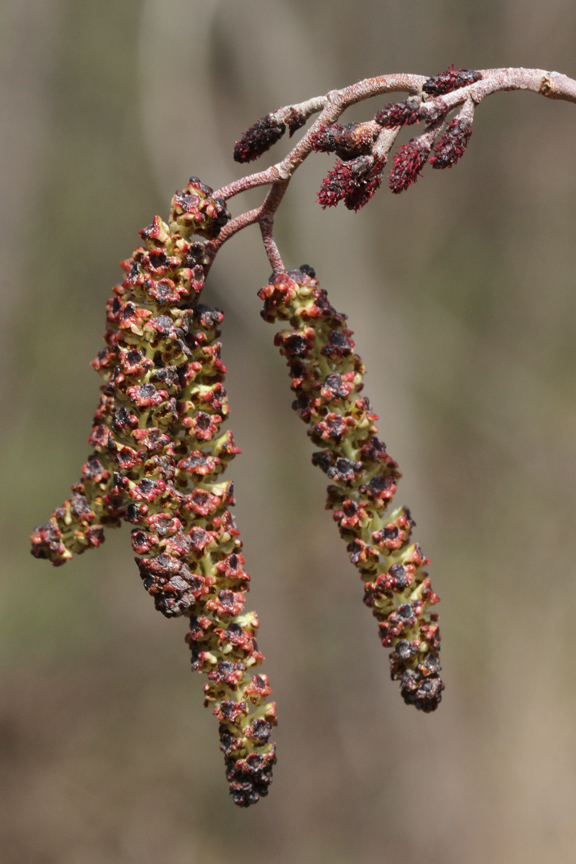 Speckled alder’s flowers are one of the first flowers to open in the spring.  Look for this shrub near streams and ponds.  One of its most distinctive features at this time of year is the presence of last year’s fruit, which look like miniature woody cones.  Also present through the winter, but opening now, are male and female flowers, or catkins.  The pendulous male flowers open and extend when their pollen is ready to be dispersed. Above them are the tiny, maroon female flowers, which are exquisite when viewed through a hand lens. Even though they flower at the same time on the same shrub, the position of the female flowers above the male flowers discourages self-pollination and encourages cross-pollination in this member of the Birch family. 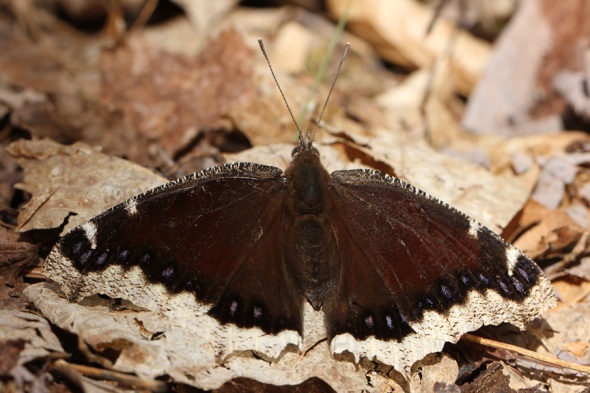 With the warm temperatures this week, mourning cloak butterflies have been seen gliding through the leafless woods.  Like eastern commas, question marks and red admirals, mourning cloaks overwinter as adults.  They resemble dead leaves so much that from a distance the entire insect seems to disappear.  Up close you can see the velvety texture of the wing scales, said to resemble the clothing mourners used to wear; hence, their common name. Mourning cloaks live up to ten months — an impressive life span for a butterfly.  As they age, the yellow border of their wings fades to an off-white.