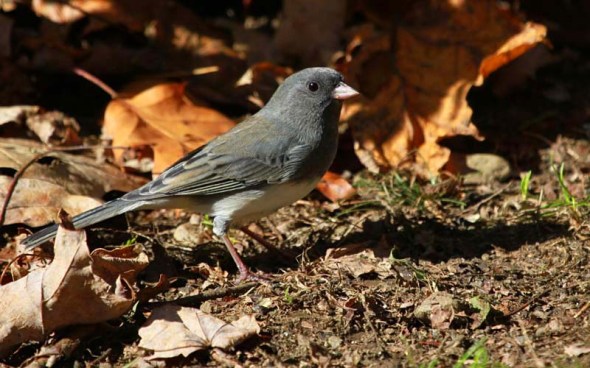 Countershading is a common color pattern in animals in which the upper side of the animal is darker than the lower side.  This color pattern provides camouflage for the animal when viewed from the side, above or below.  The counter shading pattern balances the sunlight on the animal’s back and the shadow beneath the animal so as to blend the animal’s side profile with its surroundings.  In addition, when viewed from below, a counter-shaded animal with a light belly blends into the light coming from the sky above. When viewed from above, the darker back of a counter-shaded animal blends into the darker ground colors below.   Birds (which spend a considerable amount of time in the air) such as this dark-eyed junco, as well as marine animals often exhibit countershading. 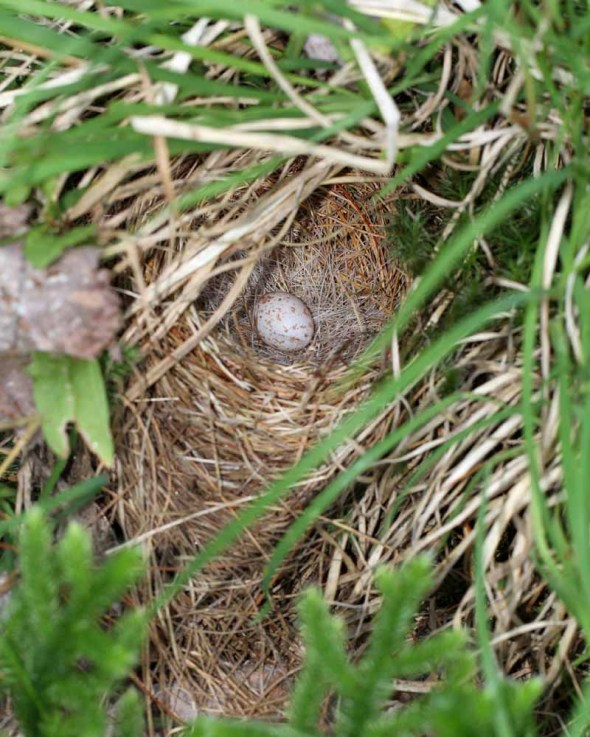 In New England, Dark-eyed Juncos typically have two broods in a summer. The second-brood nest in the photograph contains the first of probably four or five eggs which are laid one day at a time. The egg lies on a soft lining made from the hair of a White-tailed Deer. Unlike most songbirds, Dark-eyed Juncos build their nests in a wide variety of sites, from the ground up to eight feet high in trees. Often they are in a small cavity on a sloping bank (well hidden by surrounding grass), under a protruding rock or among tree roots. But they’ve also been found under fallen tree trunks, on supports underneath houses on stilts, in barns or lofts between hay bales, in vines on the sides of buildings, on window ledges and light fixtures and in hanging flower pots. It’s not unheard of to find a Dark-eyed Juncos relining the old nest of an American Robin.